How to Play Go Fish: Card Game Rules and Tips to Win 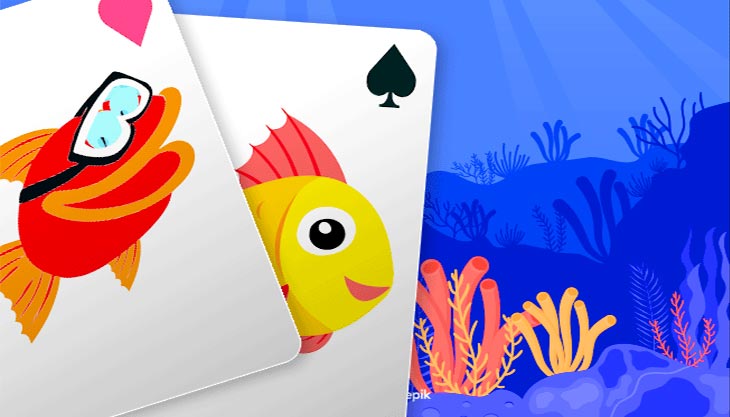 Go fish is an exciting and ideal fish card game for filling up your leisure time and bonding time with family and friends. A minimum of 2 and a maximum number of six people are required to play the game. So, if you consider including a pack of go fish cards in your next travel pack, you are definitely on the right track, and do not worry if you don’t know how to play go fish card game.

The rules for go fish are easy to learn, and this guide will answer questions like how do you play go fish? It also provides you with all you need to know to get started and play your first game without much hassle. 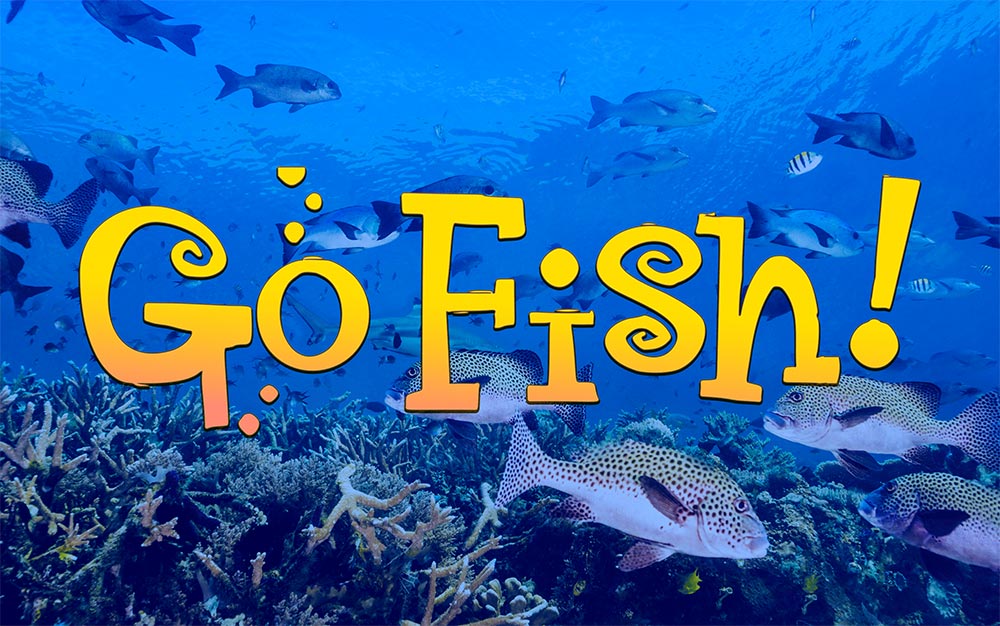 Your primary goal in a go fish game is to create as many 4-of -a-kind matches as you can, using go fish cards while playing by the rules of go fish; because at the end of the go fish game, The first player to exhaust his cards after having created 4-of-a-kind matches with them becomes the winner.

A four-of-a-kind match is also called a book.

In this guide, you will learn:

The Pack of Go Fish game

First things first, know your cards. The total number of cards in the standard deck of go fish cards is 54, including 2 jokers. Usually, five cards are dealt to each player; however, if there are fewer players, then seven cards will be dealt. The rest of the cards are spread out at the center of the table to form the pool.

The go fish cards rank in descending order from ace to two. Once the cards are dealt, the game begins. The player on the left side of the dealer plays first. All the players have the same goal; to create books from all their go fish cards. Having studied the cards thoroughly, the next question on your mind is probably “how do you play go fish?” 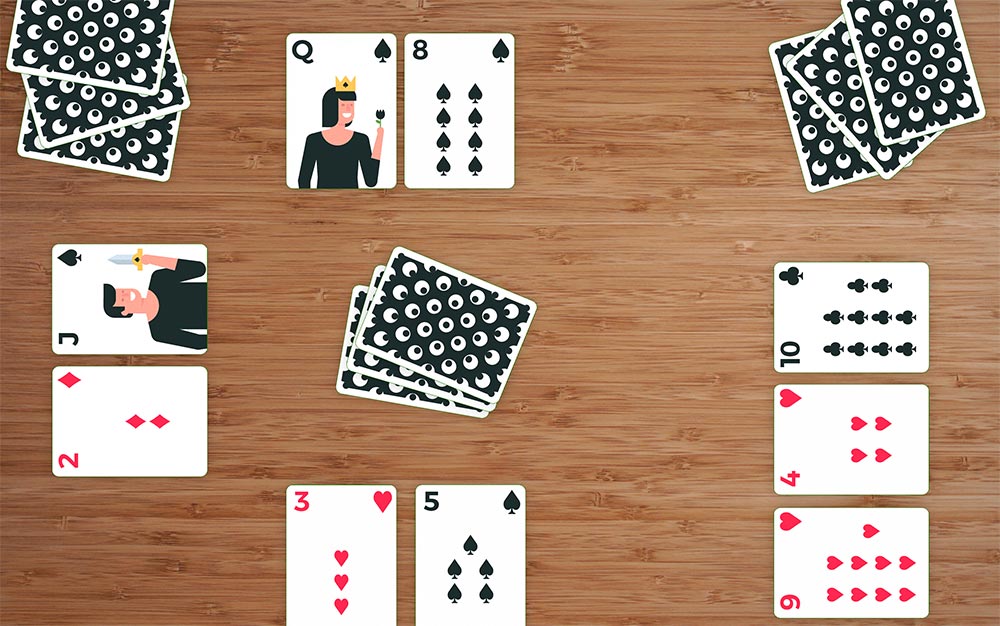 The go fish card game can be played by 2 to 6 players. The first step is to pick the dealer among the players to shuffle and deal the cards. The dealer can be selected at random or picked based on a pre-agreed factor like the last winner or the player whose birthday is coming up next.

Ensure that all players take turns being the dealer, so no one person gets stuck with the role. The dealer deals one card faced up to the players, then the dealer shuffles the cards, and the player to the right cuts them.

Always keep your hand hidden at all times, so other players don’t know all your cards.

The dealer completes the cut and deals the cards face down in a clockwise manner, starting with the player to the left.

The rest of the cards are placed face down on the table to form the “pool” or “ocean.” Have the dealer remove all the jokers from the deck before shuffling and dealing the cards and ensure that each player gets an equal number of cards as all the others. The more players involved in the game, the lesser the number of cards that will be dealt to each player. 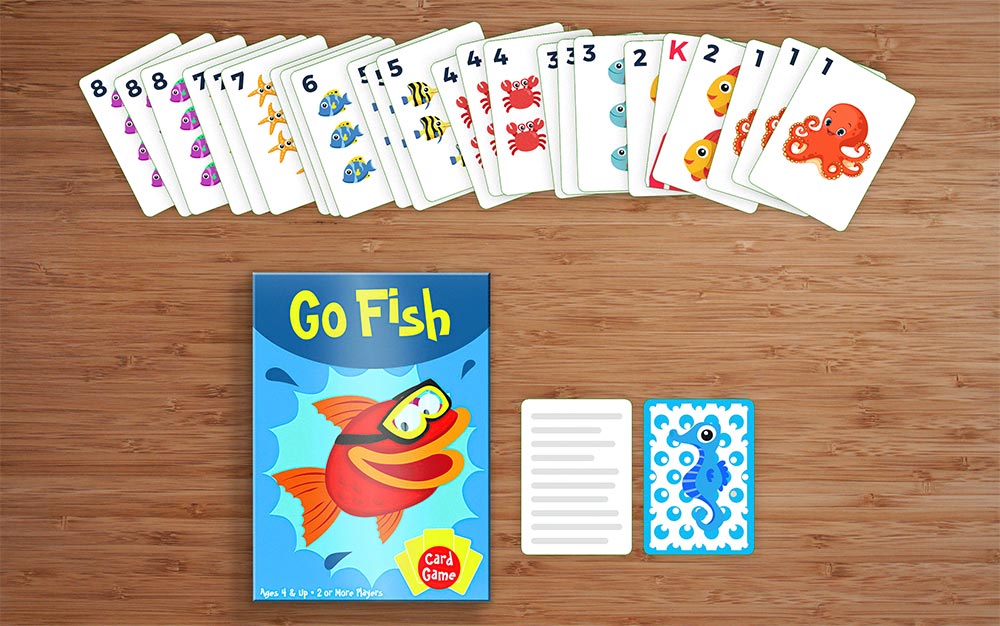 How to play go fish in more details

For example, 2 to 3 players should get up to 7 cards while 4 to 6 players get 5 cards. You can choose to spice things up a little bit by using two decks instead of one; this way, players are dealt double the number of cards and prolong the game.

The player to the left of the dealer looks directly at any opponent and could say, for instance, “Give me your kings.” When asking, the player should address the opponent by name and also specify the rank they want.

The player who is “fishing “must have at least one card of the rank he is asking for at hand, and the opponent must surrender all the cards requested. If the opponent doesn’t have any of the cards, they say, “Go fish!” The player then draws the top card in the pool.

There are thirteen books in all. Once all thirteen books have been won, the game comes to an end, and the player with the most books wins. During gameplay, if a player is left without cards, they would wait their turn and draw s card from the pool and then ask for cards of that rank. If the cards in the pool are finished, then they are out of the game.

Once a player has formed a book, he should place it face-up on the table for everyone to see. Then he automatically gets to play another turn, and the game proceeds left, except he makes another book. The game ends when all the cards are exhausted, and the player with the most books wins.

To play go fish online is easy. All you have to do is follow the go fish card game rules, and you should get the hang of it quickly.

Both online and offline versions of the go fish game are played similarly; thus, a player who is well versed in the card game should have no problem with the online version of the game as well. 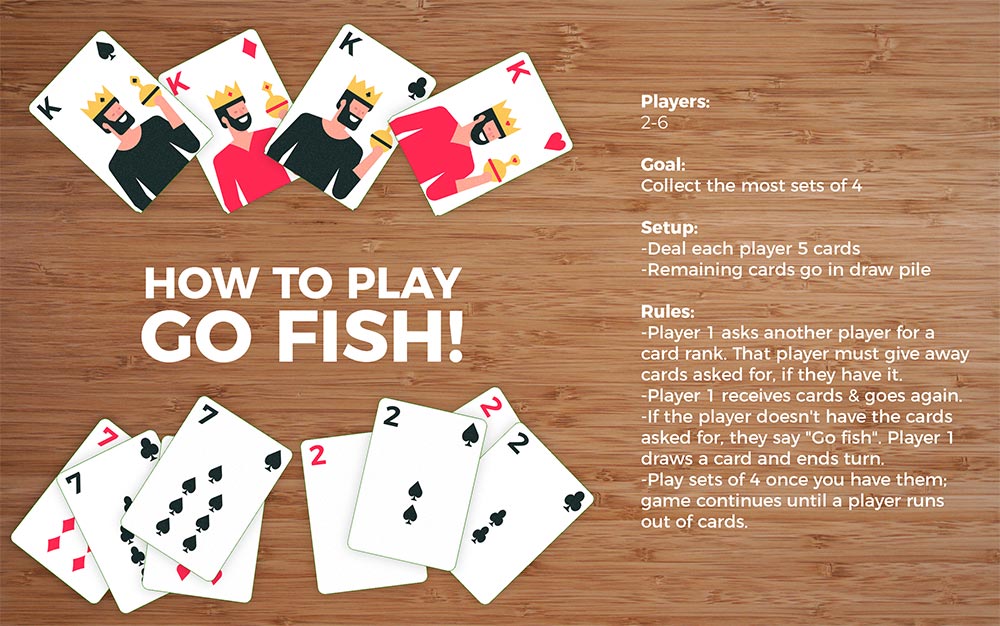 The first step to becoming a pro at go fish is to learn how to play go fish to win, and this requires playing the go fish rules. The game ends when one of the players is rid of all his cards after having made matches of them. So, the trick is to make 4-of-a-kind-matches from all your cards as quick as possible.

As soon as you make your matches, don’t hold on to it. Lay it down in front of you so everyone can see it.

You are entitled to another turn after laying down your match; this gives you an additional advantage over other players to start working on your next game before someone else comes to take your cards away.

In some game variations, the objective is to make 2-of-a-kind matches instead of the usual four.

Go fish is one of the most accessible card games to learn. How do you play go fish?; this is one of the most common questions enthusiastic beginners ask. However, the moment you get acquainted with the rules for go fish, every other thing comes easily.

Winning consistently requires strategic gameplay and adherence to go fish rules at every point in time. Once you play your first game, you’ll find it easier to play go fish online as well as playing other variations of the game.

Did you play the battle in the air? No? You have the opportunity to train your skills now.

An exciting mix of parking and drawing in one online game invites players to have an exciting time placing cars. This time, you will not need the ability to drive for this. Draw a route from the car to the parking lot.

Welcome to Stone Miner: Crush the stones with your truck, Mine the resources, Sell them on the base, and Upgrade your truck to get even more! There are different types of islands you can explore, the further you go the more rare ores you get. Try to upgrade your truck to be more powerful!

Let’s show your style in Glam-Doll-Salon. Glam Doll Salon is a fun design and dress-up game for girls! All kinds of dresses and cosmetics are waiting for you. All you have to do is design the latest styles, makeup, and hair, then dress the model until she looks perfect! Who does not like beautiful girls? Let’s begin now!

Matrix Ball is super fun and addictive one-touch casual game. Press and hold on to the screen to start this addictive arcade game!

Skull Gold Adventure is the addictive temple run game – can you beat their high scores?!