Freecell Solitaire is not by far the most popular Solitaire game, and many people dread the game as they are of the notion that it is way too tricky and complicated. Well, their opinion is not far-fetched, the game is indeed tricky and could mess with one’s head now and then.

The game is quite tricky, but it’s so much fun when you finally get to learn. So instead of throwing in the towel and missing out on a very cool opportunity to have fun. Just like many board games out there, Solitaire games are not only games to pass the time with they also make you smarter in the long run.

Freecell games are variations of solitaire card games invented by Paul Alfille. It is a complex game that requires cognitive skills. Although the game is quite tricky, you only need a couple of trials and practice.

Learning about Freecell and how to play is the first step to becoming a pro. Note that adherence to FreeCell instructions when you play FreeCell is imperative.

The game aims to play all 52 cards into four piles; one of each suit.

Start each pile with aces, then subsequent numbers like two, three, and four follow till you get to the king. The home cell piles are located on the upper right corner of the screen. So that said you start the game by moving any free ace to one of the home cells. Note that only aces that are not covered by other cards count as free aces.

Playing Freecell Solitaire online is more comfortable as the algorithm is already programmed to make some automated moves; for instance, once you start the game, the algorithm will automatically move free aces to the home cell piles. 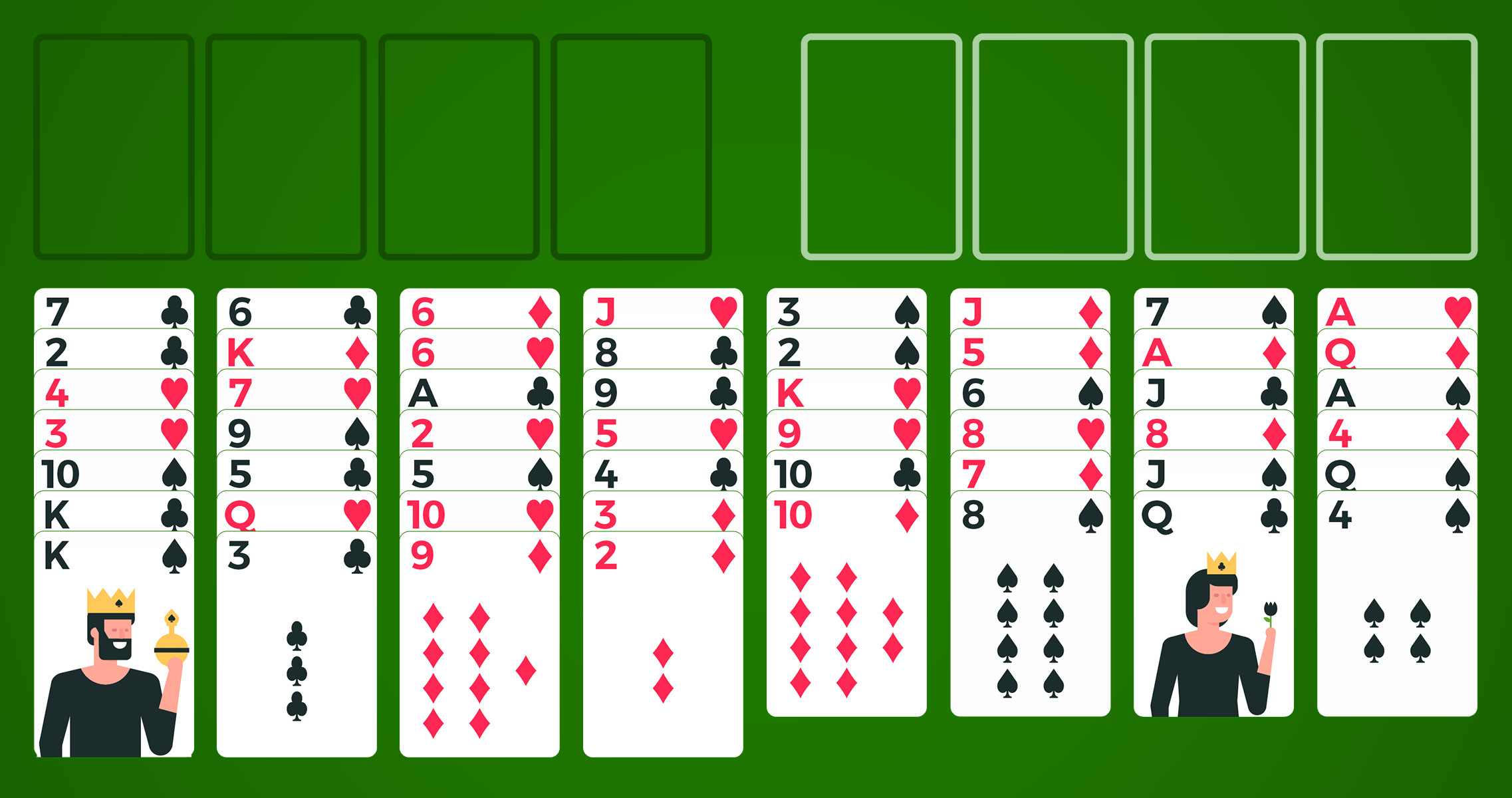 Before we get into the process of gameplay, it is imperative to know the basic FreeCell solitaire rules.  There are FreeCell rules regarding moving cards around; hence one must be aware of these rules to avoid penalties.

Listed below are basic Freecell Solitaire rules that will save you from penalties and help you win Freecell solitaire games more often. 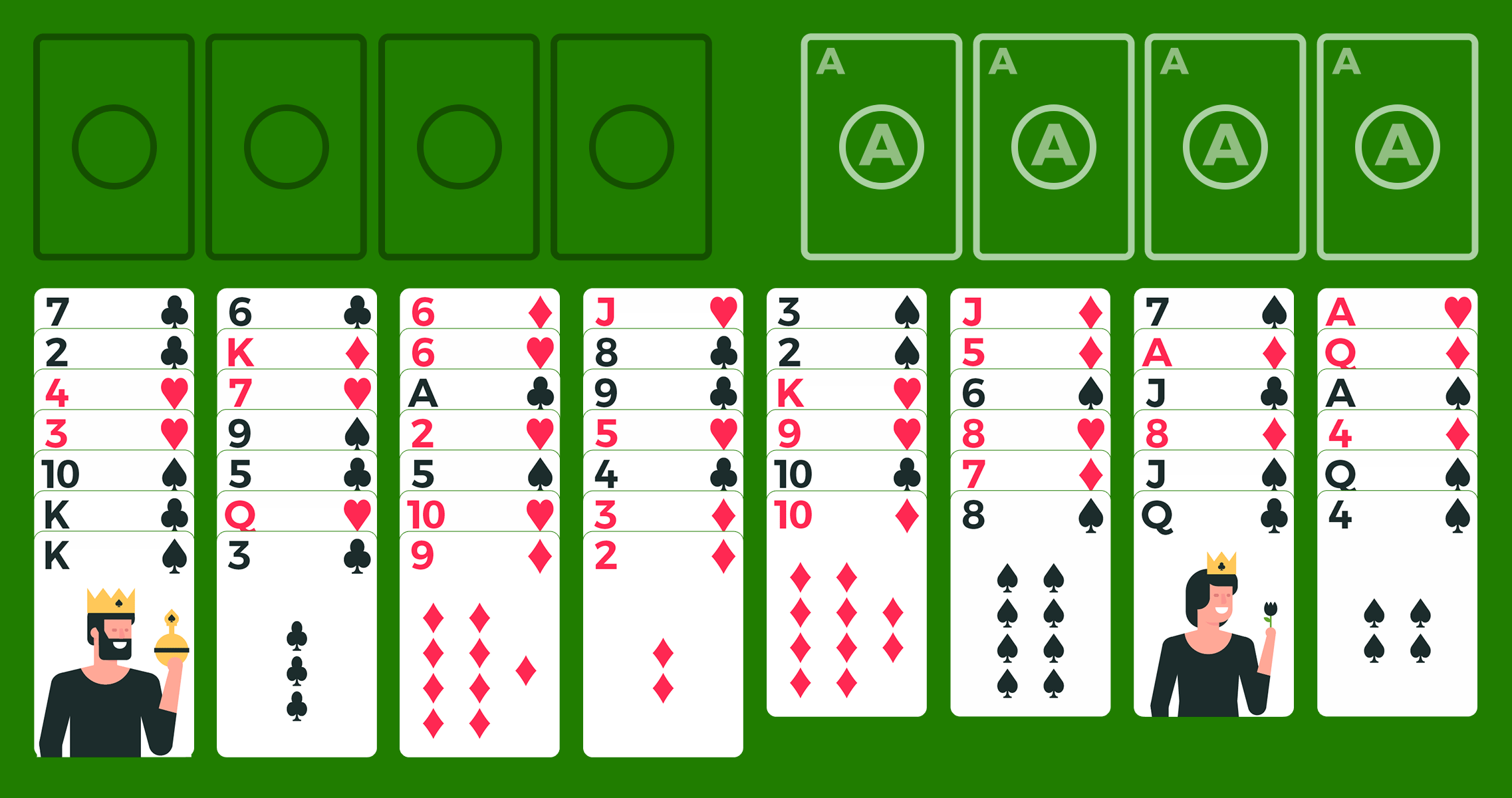 If you are used to the cards only, then you must learn FreeCell – how to play on a computer. Gameplay slightly varies depending on the app, or site you are playing on, but basically, there are three significant kinds of moves for playing Freecell solitaire online:

In a situation where there are already cards of that suit there, you can move the card with the next highest value.

Moving a card to a Freecell helps you figure out how to play better as it is readily available to be moved to its home cell. To move a card, select your choice card by clicking on it then click on your destination point; either a Freecell, home cell, or column.

Any card standing alone in its column is also considered a free card and thus, can be moved whenever you want as well.

Note that this rule is only valid if both cards are of opposite colors and one of the cards is of a lower rank; For example, moving black suits on red suits and vice versa.

This move is quite common in the traditional Klondike solitaire game.

How to Play Freecell Solitaire

Your primary aim at the start of the game is to free up aces and clear out columns using the least amount of free cells. After all, what is FreeCell without free cells?

You can start by moving the six of hearts onto the seven of clubs when you do this, and the algorithm automatically moves the ace of diamonds to a home cell.

Once this is done your next five moves will be to:

At this point, you should have two home cell piles already, and all four of the free cells empty. The next step is to empty column six by moving the ten of clubs onto the jack of hearts, and the nine of hearts onto the ten of clubs.

Note that you may move any free card anywhere on the tableau to the empty column.

Moving back to column 1 make the following moves: 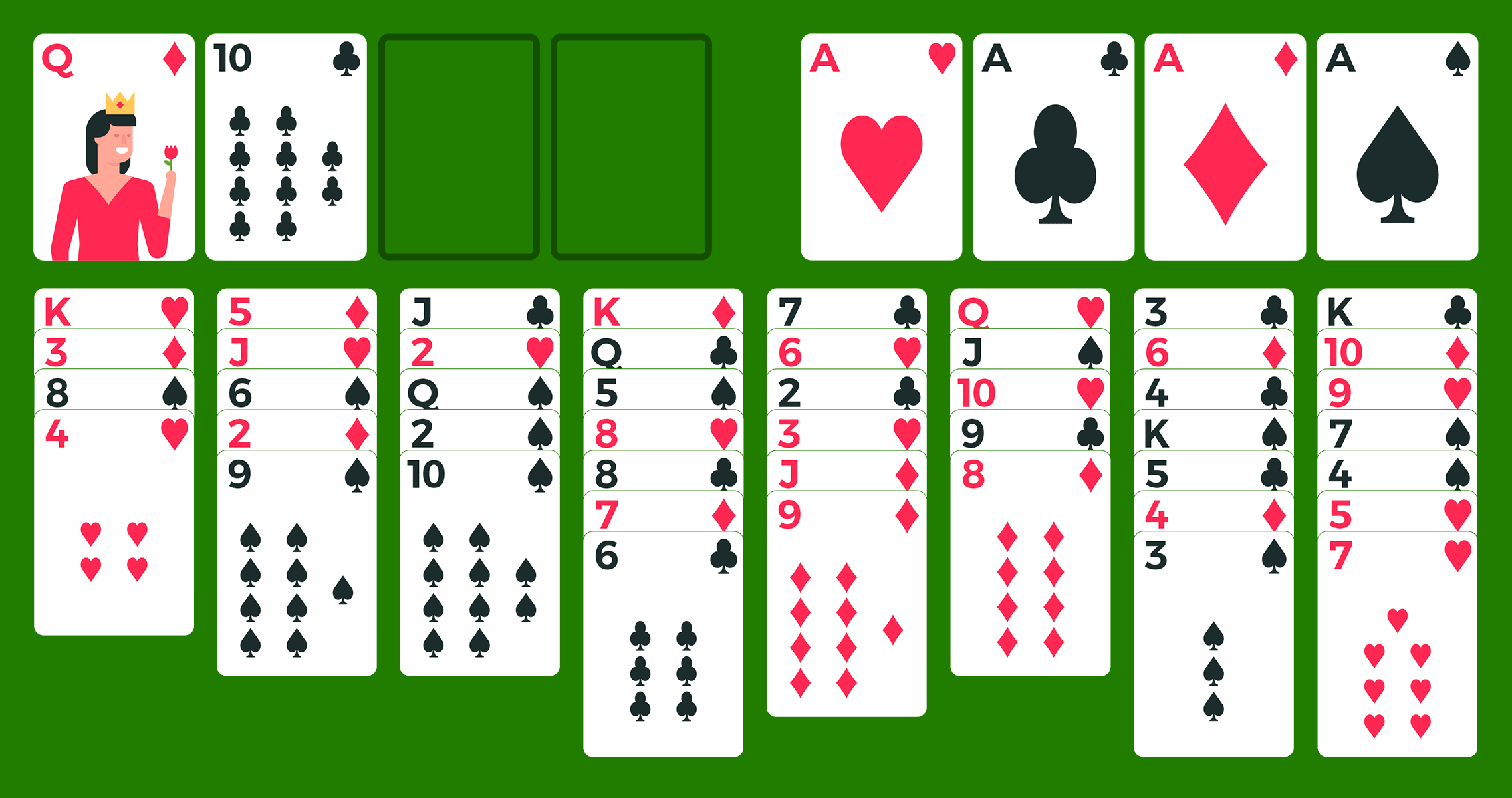 Once these moves are made, the ace of hearts and the two hearts will be automatically moved to a new home cell. So instead of moving just one card per move here is a shortcut that can help you move multiple cards all at once if you have enough Freecells.

Remember that maintaining FreeCell is key to figuring how to play.

If you are continuing a valid sequence or to another empty column. Select the five of hearts by clicking on it, then click on the sixth column, which is now empty.

The program will put up a dialogue box asking whether you wish to move a sequence or a single card when this happens to click on the move column box.

Watch as your three-car sequence (the five of hearts, six of clubs, and seven of diamonds) moves to the empty sixth column. At this point, you have made lots of progress, and you should be getting the hang of the game already. Now, move the eight of diamonds onto the nine of spades.

Next move the seven of spades onto the eight of diamonds, and the five of diamonds to a Freecell; this automatically moves the ace of spades home.

Move the eight of spades onto the nine of hearts. Since we only have one Freecell available, we want to move some of the cards from the free cells back onto columns.

So make the next moves:

Now you are probably waiting for the program to move the free three of hearts home automatically, but it won’t this time because it thinks that you want to move the free two of spades onto the red suit here later.

So you’ll have to move the three of hearts home by yourself by selecting it and then clicking on the two of hearts.

Now the next item on your list is to move a five-yard sequence from the seventh column to the eighth. But first, you must reverse the backward sequence in the fourth column by moving the king of hearts and the queen of spades to the eighth column which is now empty.

Now you would realize that lots of cards are trapped underneath long sequences in columns five and seven, so you must move five cards from column seven onto the queen of spades in the eighth column.

It’s easier to access the low-value cards in the seventh column, now you need to move the queen of clubs to a Freecell, then ensure the four of hearts finds its way home.

The jack of clubs goes onto the queen of hearts, and the six of spades to the seven of hearts. After which you get the three of clubs home so the two of diamonds can find its way home once it is free.

With the two of spades automatically gone, and both red aces home, you only need to get the three of spades home as well, then move the five of diamonds onto the six of spades.

At this point, you must have gotten eleven cards home and already seeing the end of the game; now you can choose to tow the long route or wrap it all up by moving the long 9-card sequence in two easy moves;

Finally, your final move is to move the eight of hearts onto the nine of clubs and the king of diamonds onto an empty column.

Watch all remaining 38 cards now in a sequence move automatically to the home cells. And voila! Victory!!

Learning how to play FreeCell solitaire card game involves continuous playing. You would realize that playing the same shuffle several times will provide you with more experience to win more difficult levels. You will get better if you play more.

During gameplay ensure you adhere to all Freecell instructions, observe Freecell rules when moving cards.

Keep practicing with the strategy described in this guide, and you will get better results in no time and long to spend more time enjoying Freecell Solitaire.

Tap the bucket to move the ball. Arrange all color balls in the same bucket.

How fast you can reach 2048 tiles? Classic board is simple, try a bigger board to challenge yourself.

Flappy Bird 3D! Guide Flappy Bird 3D through as many pipes as you can. See the famous bird with a whole extra dimension. Play Now!

In Solitaire TriPeaks Garden you can play hundreds of levels filled with the most addictive version of solitaire there is!

Matrix Ball is super fun and addictive one-touch casual game. Press and hold on to the screen to start this addictive arcade game!

Play as a cute little worm who is fleeing from the flood in this adorable skill game and try to wiggle as far as possible to earn a high score!

Are you ready to become a hero, spy, and legend? Solve puzzling challenges, show off your deadly accuracy and take aim at the enemies.

How many skeletons you can fight in this blockbuster adventure game? Play to find out!

Tac Tac Way, the only game that requires a personal Zen master to be played. Be careful to stay on the wall and follow the path!

Play pool like a pro with this addictive single-player online free game. Play and win!

Have you played Ice Hockey Shootout? Can you outplay the goalkeeper? Play and Try!

Connect letter by letter, and open word by word to complete each level in this free crossword puzzle.

Tetris puzzle game. If you like a good mind-challenging game, then you are at the right place! Try candy blocks game now!

What about space fighting? Can you protect our galaxy from enemy battle squadron? Enemies are coming!

Play racing game with limited time to find out if you can squeeze the maximum out of the race car. Avoid collisions!

Traffic is mad, cars are driving like crazy, but you need to get your car on that other side of the road. Can you make it?